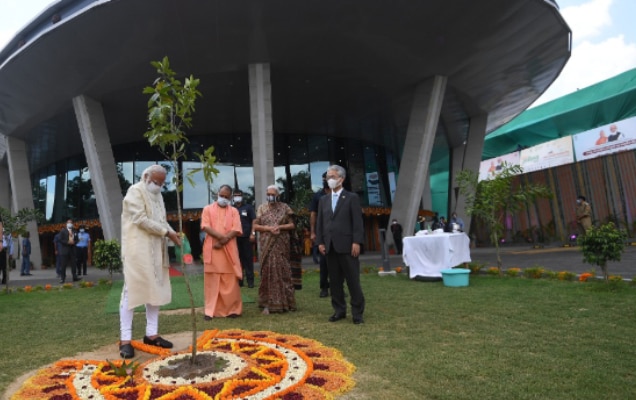 Prime Minister Narendra Modi’s representation of Kashi as its MP has been unique in many ways. Kashi has been called by many as the heart of India’s culture, tradition and heritage. And yet, for the longest time, the kind of attention merited by the city’s significance was nowhere to be found.

All this changed when Prime Minister Narendra Modi started representing Kashi. PM Modi has always felt extremely fortunate to have been given this opportunity. In fact, as he has said more than once that he has been specially called by Maa Ganga to come and serve the city and its people.

Kashi too, after years of neglect is witnessing a revival and growth. While development of the region, be it better roads or better healthcare and education, is seeing an upward tick, this growth also focuses on rejuvenating the heritage of Kashi and giving its vibrant culture new avenues to explore and express itself in various forms. People are aware of the ongoing corridor that is reviving the historical temples of Kashi and giving them a new lease of life. However, there are many other offerings to the city helping its cultural renaissance.

The sister cities agreement that Kashi and Kyoto of Japan share with each other is not merely on paper. Rather, it connects cities that are truly the souls of their own nations. In this regard, the Japanese have shared their experiences of developing Kyoto without losing its distinct heritage and flavour, and have worked with PM Modi to give Kashi its due. One prime example of this cooperation is the world class Rudraksh International Convention Centre that has come up in Kashi.

Designed like a Shivalinga with 108 Rudrakshas on its façade, the building form and philosophy behind this Convention Centre is inspired by Kashi’s tradition of people-friendly spaces. With modern facilities like divisible meeting rooms, art gallery and multi-purpose pre-function areas, the place provides opportunities for artists to showcase themselves and interact with the people as well.

The signature highlight of the Convention Centre is the 1,200-seating capacity international standard auditorium built in it. The city has always been famous for its ancient traditions of theatre, classical music and classical dance. This auditorium truly lives up to the city’s reputation, as it now provides the perfect space for hosting such artistic expressions.

For the longest time, there had been demands for a sound and light show that would make Sarnath’s history be known to tourists and commoners alike. Thanks to PM Modi’s efforts, the sound and light show finally saw the light of day, and has been inaugurated at the Buddhist archaeological site of Dhamkha Stupa at Sarnath. This 30-minute show, which is held every evening, portrays the journey of transformation of Prince Siddhartha into Lord Buddha. Sarnath is the place where the Buddha had given his first sermon after attaining enlightenment, and there could be no better tribute to it, as it connects tourists with Kashi’s heritage while instilling ever greater pride in the local people.

One of the aspects of the Smart City project for Varanasi has also been to connect the ancient with the modern. Heritage sites, ghats and historical monuments in Varanasi have been provided with ‘smart signages’ with Quick Response (QR) code. These signages give information to visitors and tourists alike about cultural importance of heritage sites and the 84 iconic ghats of the city which are known for their antiquity and architectural beauty. Sculpture signages have also been installed at the Assi ghat and Khidkiya ghat, providing information about various events like Ganga Arti at Dashashwamedh ghat, annual Naag Nathaiyya event at Tulsi ghat. The smart signage at Manikarnika Ghat and Harishchandra Ghat, where last rites of people are performed, is meant for people to know about the traditional rituals of these ghats.

These are just among a series of projects that are being pursued at a rapid pace. Be it the façade improvement of the Dashashwamedh-Godaulia quarter and old Kashi-Raj mandir road among others, the development and beautification of Nadesar pond, restoration works on the Man Singh Observatory, the development of the Piplani katra kabir chaura to Assi ghat Heritage walk or the restoration and rejuvenation of kunds like Lat Bhairav, Durga Kund and Lakshmi Kund, these initiatives are testament to the efforts being put in through various quarters to restore the pride of Kashi with the help of modern technology. These, in addition to the work done to restore and revitalize the ghats of Kashi, are adding to the glory of the city’s traditions, bringing immense satisfaction to its residents and millions of people all over the world who feel a special connection with Kashi.

With PM Modi at the helm of affairs on Kashi, the city is regaining aspects of its glorious heritage, while also developing itself to meet the requirements of the 21st century. This all-round development model that is sensitive to heritage sets the tone for the manner in which cities across India, many of which are ancient as well, can balance the twin needs of preservation and propagation of growth simultaneously. It is for all to see that today, a new leaf has grown on the Akshaya Vat of culture that is Kashi, that continues with its millenia-old traditions, where the sound of shabda have reverberated since time immemorial.