An Ode to Madan Mohan Malviya 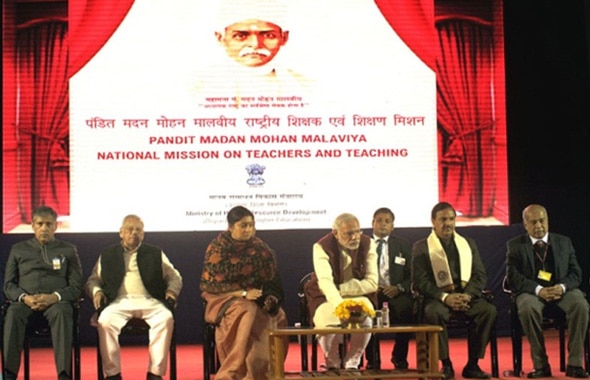 Narendra Modi launched the Madan Mohan Malviya National Mission on Teachers and Teaching at the Banaras Hindu University in Varanasi.

Speaking on the occasion, the Prime Minister described the land of Kashi, as one which gave us “Shiksha Ki Sanskriti” (a culture of education). He said the education system is meant to develop a holistic humanist vision along with science and technology.

The Prime Minister said “good education” is in great demand across the world and among all sections of society. India`s youth can fulfill this global requirement of teachers, if they are trained effectively. “If a teacher goes abroad, he benefits and captures the imagination of an entire generation” opined the Prime Minister & added that Madan Mohan Malviya National Mission on Teachers and Teaching is a step in this direction.

Varanasi is the only place from where the revered Ganga is Uttar Vahini (flows towards North). It is here from where the powerful stream of the river Ganga turns directions. Thus, the start of the biggest change will also happen from Varanasi. The country is moving towards GOOD GOVERNANCE and this message initiated from the Varanasi will light a NEW HOPE in the entire country.

Narendra Modi unveiled the plaque of the Inter-University Centre, and launched the Campus Connect wi-fi of Banaras Hindu University.

Narendra Modi launched the Varanasi Mahotsav & stated that such initiatives would help boost tourism. The PM called upon schools and educational institutions of Varanasi to develop expertise in various aspects of Varanasi`s rich culture, which would help them contribute towards drawing the attention of tourists visiting Varanasi.